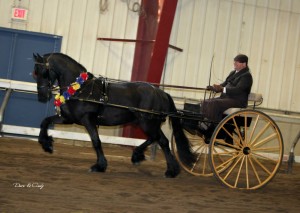 Our beautiful Mare Hendrica LSI was named IFSHA Region 1Champion Purebred Friesian Mare and IFSHA Region 1 Reserve Champion Friesian Sport Horse Mare with Gareth showing. Mink LSI was Region 1 Top Five in very deep Gelding and Liberty classes, remeniscent of the World Show in Virginia 2011. Nelis LSI came through as the Champion he always is with several wins in Harness and ending the weekend by being named Champion Open Pleasure Driving with owner/breeder Rick Butts as whip! Selwood Park Renegade remained undefeated in Halter competition by winning both his Region 1 titles and making his debut in Pleasure classes with our good friend Danielle Barrasso in the Irons for his maiden trip. Danielle rode him beautifully through some bumpy moments as he learns to canter in the big ring. The Lorick Show Team of Lorie ,Rick, Gareth. Tristan and Dave wish to thank everyone for their great hospitality and congradulate everyone on the Region 1 Champions!