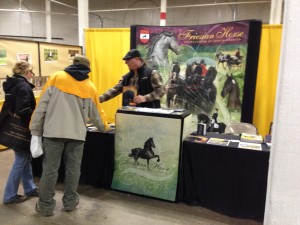 IFSHA and FHANA members and their beautiful black horses were everywhere to be seen all four days of the event. Lorick Stables from Western New York and Majestic Friesians of Vermont each had a booth and stall in the Breed Pavilion and each were flanked by the IFSHA and FHANA booths respectively. Pam De Simone showed her beautiful World Champion Costumes and helped tremendously with the IFSHA Booth. Members and Friesian Enthusiasts of all types were present to volunteer and promote our great Breed and were all united with the same passion. Many new Friendships were made as everyone shared their Friesian stories with over 50,000 people over four days.

We presented the horse in Driving,Halter,Western,Costume,Saddle Seat,Hunt Seat and Dressage. The beautiful Pinto Filly, “Deja D”  by World Champion Steffan S and out of (USEF Horse of Honor) Selwood Park Deneuve represented the Part Bred Friesian owned by Danielle Barasso and sold to a Happy New Owners Doug Weaver and Sharon Sutcliffe at the Event ! We are all making plans for next year. Same Place Same Time.