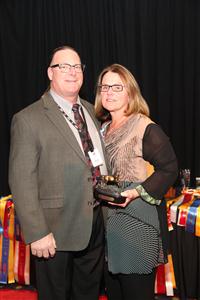 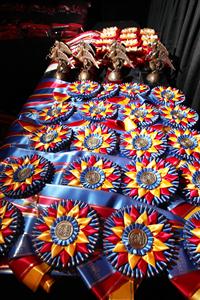 Lorick Stables has been the passion of Lorie Washuta and Rick Butts for almost twenty years. From structural concept to breeding and then personalized training and care, their time, resources and energy have been dedicated to this winning farm of happy horses.

Their passion for breeding Dutch horses began when they purchased their first Friesian in 1997. That mare, Diane D by Frans, produced, when bred to Warn, the two mares, Zeva LSI and Vianke LSI who are still the mainstay of this very special Breeding Program.

These two mares produced Mink LSI by Iron Spring Farmsʼ Teade and Nelis LSI by Sibald 30. Nelis finished another great Show season in 2013 by being named the Friesian Horse of the Year in Dressage by USEF and Mink LSI won the Reserve Championship in Junior Exhibitor Horse of the Year for his new owner Diane Cooke.

Oukje-Elza, one of our mares bred by Diane Dominguez, is the dam of several Champions including our up and coming Halter Super Star and Region 2 Champion Mare, Ava LSI by Lammert. Arja LSI by Teade has surpassed our expectations at the 2013 World Championship in Virginia by becoming a “Ster” mare at the FHANA Keuring, then going on to win three World Championships in Halter (In Hand, Sport Horse and Baroque) and a Reserve in the Amateur Halter Division with our friend Dale Pitcock.

Lorick Stables is located in beautiful Youngstown, New York, just a few miles from the Canadian border and Niagara Falls. LSI horses compete at IFSHA/ USEF Horse Shows all over the country, and they also exhibit at Horse Fairs and American Driving Society events as well as USDF Dressage Shows. The farm and horses are managed and trained by Gareth A. Selwood, a USEF Equestrian of Honor and multicarded judge. NUTRENA FEED continues as sponsor and consultant. Lorick Stables looks forward to future competitions and winning horses.