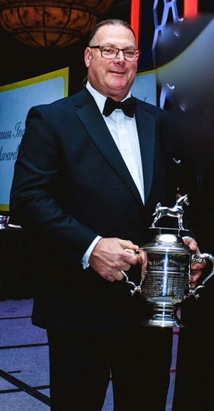 Lorick Stables, Youngstown,NY.
2016 began with Lorick Stables receiving “The Ellen Scripps Davis Award” for Excellence in Breeding Show Horses by the United States Equestrian Federation in Kentucky.
2015 was another “Stellar year” for Lorick Stables and their Friesian horses. Rick Butts and Lorie Washuta have been breeding Friesians for almost twenty years. In 2015 Rick was very proud to receive the 2014 FHANA Performance Driving Award at the AGM in Baltimore,Maryland. In 2016 Rick Butts was awarded the Presidents Award for Driving at the Friesian Horse of North America’s AGM in Fort Worth,Texas.
In 2016 Rick has an impressive show string of Lorick Stables Inc. (LSI) Friesians horses and will exhibit in many different styles of Driving. With the popularity of Driven Dressage on the rise, Lorie and Rick have added a regulation outdoor arena and have started on building an Obstacle Driving Course on the Farm property. The breeding and promotion of the Friesian Horse continues to be of paramount importance at Lorick Stables and now Resident Trainer and Equestrian of Honor,Gareth Selwood is offering training to outside clients. 2016 should see the first Horse Show hosted at Lorick Stables and possibly a Carriage Drive.
The Lorick Team is looking forward to another fun-filled year of competition with his horses and friends.