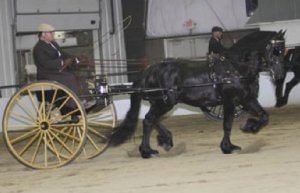 Bred and owned by Lorick Stables, Nelis LSI has dominated
the Show Arena since July of 2011. Nelis LSI began his show career in Dressage with Eleine Eckroth on the tough Florida circuit earning up to 74% at training level. When Gareth Selwood joined as Trainer and Manager of Lorick Stables in the summer of 2011, it was decided to make Nelis LSI our “All Around Ambassador” for the Stables and the Breed due to his incredible disposition, athleticism and talent.

Virginia in Hunt Seat Equitation and Pleasure, finishing the year as the USEF/PHR Reserve Champion in Driving and the IFSHA High Point in Equitation and earning another HOTY National Championship in Junior Exhibitor for the Friesian Division.

Butts. Nelis LSI still managed to win the National Champion Horse of the Year title for Driving in the Friesian Division and IFSHA Driving Horse of the Year without traveling to Nationals far on the west coast at Del Mar. In fact Lorick Stables won the coveted PHR/USEF Friesian Breeder and Owner of the year in 2012 without attending the World Show — and a large part was due to Nelis and his wins.

Nelis is a 2004 gelding by Sibald 30 out of Vianke LSI by Warn. At his first big show in 2011, he earned High Point Purebred Friesian at the Midwest Baroque Horse Society Show in Wisconsin, winning Championships in Halter, Equitation, Driving and Under Saddle classes. His third show out, Nelis carried junior exhibitor Michelle Meyers to victory at the World Championship in

In 2012 Nelis won Regional Championships in divisions from Halter to Equitation and Pleasure. As a competitive Carriage Driving Horse, he continued to improve and, during his first outing at Walnut Hill, he won the “Fancy Dress” class and came in a respectable fourth in his first Reinsmanship class with Rick

In 2013 Nelis LSI continues to win Championships at all the shows he enters in various divisions, including Show Hack, Dressage Hack, Hunt Seat, Show Pleasure Driving, Walk Trot and Carriage Pleasure Driving. With excellent placings at ADS events at Cazenovia and East Aurora, he is placing well in Working, Turn Out and Reinsmanship.

Nelis LSI continues to make his mark and promote Lorick Stables and the Dutch Horses they breed.