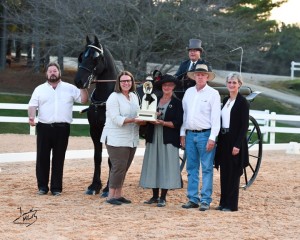 Bred and owned by Lorick Stables Nelis LSI has dominated the Show Arena since July of 2011. Nelis LSI began his show career in Dressage with Eleine Eckroth on the tough Florida circuit earning up to 74% at training level. When Gareth Selwood joined as Trainer and Manager of Lorick Stables in the summer of 2011 it was decided to make Nelis LSI our “All Around Ambassador” for the Stables and the Breed due to his incredible disposition,athleticism and talent.
Nelis is a 2004 gelding by Sibald 30 out of Vianke LSI by Warn. At his first big show in 2011 he was the High point Purebred Friesian in Wisconsin at the Midwest Baroque Horse Society Show in August,where he won Championships in Halter,Equitation,Driving and under Saddle classes. At only his third show he carried Michelle Meyers to Victory at the World Championship in Virginia in Hunt Seat Equitation an Pleasure finishing the year as the USEF/PHR Reserve Champion in Driving and the IFSHA High Point in Equitation.with another HOTY National Championship in Junior Exhibitor for the Friesian Division.

In 2012 Nelis won Regional Championships in many divisions from Halter to Equitation and Pleasure. As a competitive Carriage Driving Horse he continued to improve and was entered for the first time at Walnut Hill where he won the “Fancy Dress” class and came in a respectable fourth in his first Reinsmanship class with Rick Butts.As Nationals were far on the west coast in 2012 at Del Mar, Nelis LSI still managed to win the National Champion Horse of the Year title for Driving in the Friesian Division and IFSHA Driving Horse of the Year. In fact Lorick Stables won the coveted PHR/USEF Friesian Breeder and Owner of the year in 2012 without attending the World Show and a large part was due to Nelis and his wins. 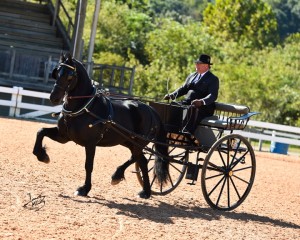 In 2013 Nelis LSI continued to win Championships at all the show he enters in various divisions including Show Hack, Dressage Hack, Hunt Seat, Show Pleasure Driving, Walk Trot and Carriage Pleasure Driving. With excellent placings at ADS events at Cazenovia and East Aurora he is placed well in Working,Turn Out and Reinsmanship. Nelis LSI .
In 2014 we decided to Specialize in Driving and costume. As Nelis LSI is so truly versatile and he can participate in so many classes we did not want to wear him out. The results speak for themselves as Nelis won multiple World Championships in Costume and Driving, ending the year as the USEF National Champion in Friesian Driving Horse of the Year.With IFSHA he was the High Point Friesian Driving horse in both Open and Breed competition. At the 2014 World Championship he was the High point Driving Horse and received the “Anita Melott” trophy as well as the “Dreams Come True Farm” Inaugural Trophy for the High Score Friesian in Dressage Driving.He was shown to most of his wins in 2014 by his owner Breeder Rick Butts and always supported at shows by his #1 Fan, Lorie Washuta (Co Owner/ Breeder).Gareth,Selwood,Danielle Barasso and Michelle Meyers also showed him to World Titles. Nelis continues to amaze us with his incredible Work Ethic and has guaranteed himself a place in our hearts and stable for life.