Orlando SG has been sold… 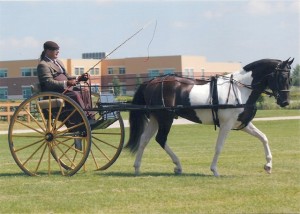 Orlando SG has been sold to Marsha and Robert Turney of Marro Farms, Alberta, Canada. Orlando SG was the USEF National Grand Champion Half Andalusian Horse of the Year and was shown by many of Gareth’s students throughout the country last season. He is pictured here driven by Rick at our first show in Elkhorn last July.We wish the Turneys as much enjoyment as Orlando gave all of us!