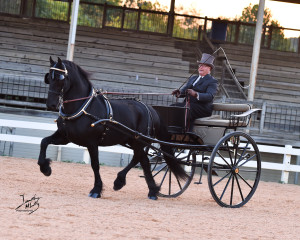 Rick Butts and his partner of twenty years , Lorie Washuta own and breed FHANA/KPS Friesians at their facility, Lorick Stables in Youngstown, New York. The farm is located just a few miles from Canada near Niagara Falls and Buffalo. Extremely proud of our Breeding Program at Lorick Stables Inc; Rick and Lorie are thrilled to announce that USEF has named them the #1 Friesian Breeder in America for the third year in a row. This means that Friesians carrying the LSI suffix have won more points at rated USEF/ IFSHA Horse Shows than any other Breeder for 2012, 2013 and 2014. An extra surprise this year is that Lorick Stables is Rated #3 in the USA as Breeder of Driving Horses of All Breeds.

Rick began driving 15 years ago and has taken lessons from such greats as Larry Poulin, Morris Kerr, Holly Thompson and Nicole Cable.
2014 Equestrian of Honor for Non FEI Driving, Gareth A. Selwood joined the Lorick Stables Team in July of 2010 when Rick and Lorie decided it was time to start showing their Friesian horses in competition. In addition to the IFSHA/USEF shows, Rick has competed at the very best of Carriage Driving Shows, including, Walnut Hill,Lorenzo and East Aurora.

Perhaps Ricks greatest victory of his driving career was winning the Inaugural “Dreams Come True” Driven Dressage award in Virginia this year. A first for Nelis LSI and Rick ! Lorick Stable;Rick Butts and Lorie Washuta are very proud of all their horsesʼ accomplishments in the show arena and all are guided and nurtured towards their individual strengths and talents from Halter to Dressage,Driving or Pleasure.

A boutique Breeding program, Rick and Lorie are expecting one foal in 2015 by Teade 392 out of their World Champion Ster Mare Menthe fan Ferwalde. Four mares will be bred in 2015.
To further Ricksʼ Driving skills and his horses training regimen, a cross country Driving Course is planned for the Spring at Lorick Stables, along with Clinics by world renowned Whips and Trainers.