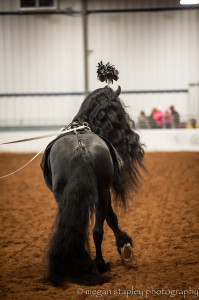 This year the event was held in memory of Austin L Moore (1924-2012) A much loved local Morgan Breeder and Pleasure Driving enthusiast. Austin,known to everyone as Red was instrumental in forming the East Aurora Driving Society in 1975.

Many people stopped by the “Lorick Stables” Table alongside the Main Arena and came back to the Barns to meet the Horses close up. Co-Owner and long time Friesian Breeder Lorie Washuta with Rick Butts, were on hand all weekend to talk about their favorite subject; The Friesian Horse.

On Sunday at Noon, Wilrick LSI and his two stablemates again thrilled the crowd as part of the Parade of Breeds. Wilrick gave a beautiful performance in Long Lines although a little nervous with such a large crowd by the rail. All was well recorded by Megan Stapley Photography. We were thrilled to be at Equifest and hope very much to participate again in 2016.